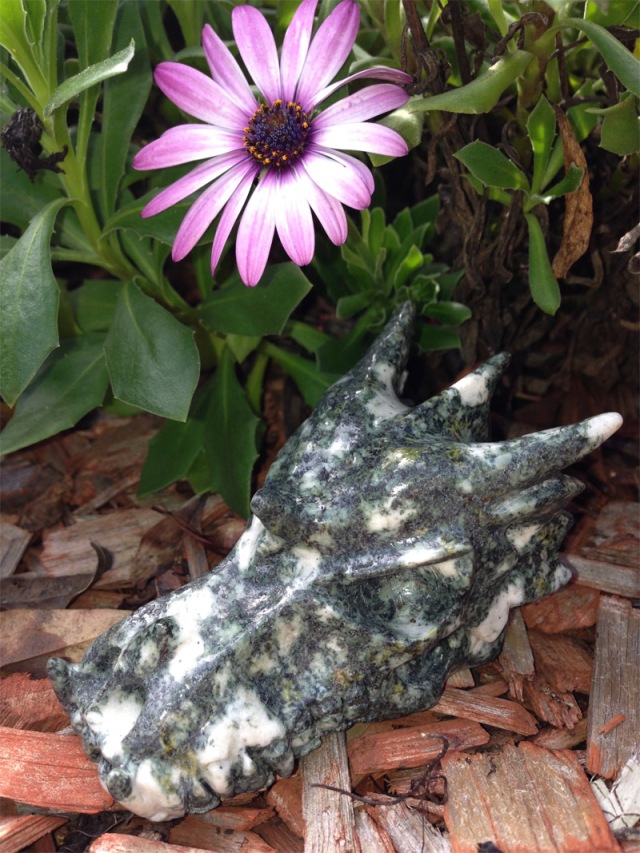 I finally purchased this crystal skull on 12th March 2015 (it arrived 24th March 2015) even though I’d been thinking about getting a Preseli Bluestone Dragon for months beforehand. My search for PB Dragon skulls only found one current supplier who has a website — Thought and Memory — and an eBay page — Ravenia’s Crystal Skull Headquarters. I made my selection from the 3 PB Dragon skulls available at the time and sent off an email to arrange the purchase, after which my beautiful new Preseli Bluestone Dragon flew here as quickly as he could. 🙂 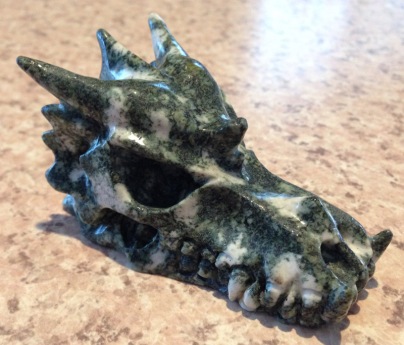 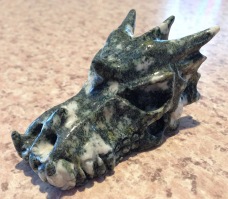 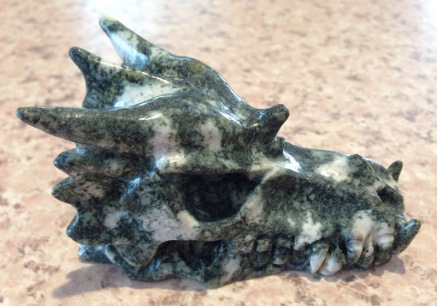 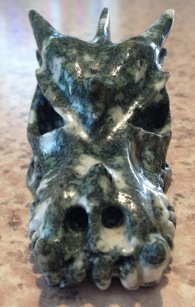 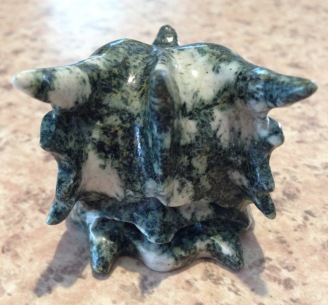 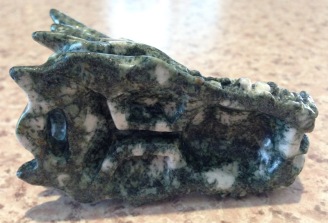 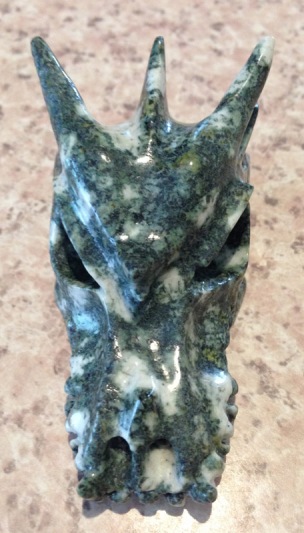 Also included was a Certificate of Authenticity: 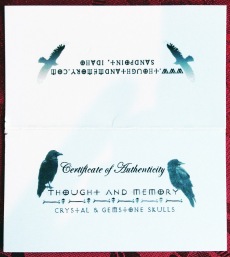 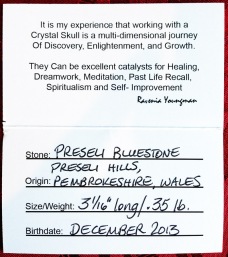 When I held this Dragon for the first time I saw an image in my mind of sparse long grass and dirt, with a few rocks scattered around and a grassy hill rising up to one side. It was a sunny day and a gentle breeze was blowing. The odd thing was that I was seeing it from the point of view of lying on the ground and looking across the surface — kinda like a small rock’s eye view! Perhaps this was my Dragon’s last view of his original home before he (or his piece of rock) was collected? 😮 Then I/we turned to look up at the sky which had become the night sky, full of millions of shining stars …just like the markings in Preseli Bluestone itself. Definitely a unique experience …one I’ve not had with any of my other crystal Dragon skulls!

Long before acquiring this Dragon I knew his name was Emrys as Preseli Bluestone has a strong connection with Merlin, and Emrys is a name associated with Merlin:

Merlin is a legendary figure best known as the wizard featured in Arthurian legend. The standard depiction of the character first appears in Geoffrey of Monmouth’s Historia Regum Britanniae, written c. 1136, and is based on an amalgamation of previous historical and legendary figures. Geoffrey combined existing stories of Myrddin Wyllt (Merlinus Caledonensis), a North Brythonic prophet and madman with no connection to King Arthur, with tales of the Romano-British war leader Ambrosius Aurelianus to form the composite figure he called Merlin Ambrosius (Welsh: Myrddin Emrys). He is allegedly buried in the Broceliande forest, near Paimpont in Brittany. [Wikipedia]

Interestingly, the 12th-century historian, Geoffrey of Monmouth, indicated by means of a story concerning Merlin that the stones of Stonehenge had come from “Ireland” (for which read the far west of Britain – Wales and Ireland had definite connections in prehistory). Many modern historians deride Geoffrey of Monmouth’s histories as a collection of myths, yet the question remains: how did Geoffrey, back in the 12th century, know where the bluestones originated? [1]

Geoffrey uses the myth of Merlin bringing the stones to Stonehenge to state that the stones had medicinal properties that could be accessed by washing the stones and then pouring the water into baths. The water absorbed the healing virtues of the stones. There is a folk belief in Pembrokeshire even today that the Preseli bluestones possess healing qualities. [2]

In England, perhaps the most well-known planting of ‘alien’ stone is that of the Preseli Bluestones at the heart of Stonehenge. Brought 250km from the Preseli Mountains in Wales, the Bluestones have always been an important aspect of this megalithic henge but have you ever wondered why? They were the first stones to be set there and were resited several times. The Bluestones are now arranged in a horseshoe inside the sarsen-stone outer ring, the arrangement mimicking the Preseli landscape, where the high Bluestone outcrop of Carn Menyn at the centre has dolerite, rhyolite and tuff rocks around its fringe. Bluestone quarry at its base has been pinpointed as the source of at least one of the horseshoe Bluestones by Professor Mike Parker Pearson’s team of archaeologists. Bluestone, with its high magnetic resonance, was once the only stone at Stonehenge, sited in the outer Aubrey Holes. These holes were lined with chalk and flint. Plugging a Bluestone into chalk creates a battery which amplified the natural earth currents on the plain and the water which flows beneath the circle in a spiral formation. The Aubrey Holes plot a complex moon cycle and eclipses. This linking together may have been part of an extremely ancient tradition that encompassed the animistic concept of landscape, and rocks in particular, being alive and imbued with a Spirit of Place – or the Spirit of the Ancestors:

Bluestone has visible feldspar inclusions that shine white like stars in the night sky and the Welsh stones also feature Rhyolite Jasper, a shamanic journeying stone with powerful links to the past. Bluestone could well have been revered as a cosmological skymap, a guidebook for the gods. The central ‘altar stone’ at Stonehenge, long believed to be Bluestone, is actually pale green sandstone studded with Garnet, which also came from Preseli. Garnet has long been revered for its magical and therapeutic powers of illumination and healing. Zircons embedded in the stones are being studied by scientists. The ancients used them as protection against lightning, bodily harm and disease. But it is the Bluestones that are the major power source at this iconic site. The stones would have been venerated for their resonant acoustic properties, which made the whole site ring like a drum. They could have effected sound healing and induced altered states of consciousness through their vibrations.

The Bluestones encompass a potent mix of crystal energies to seed into the surrounding landscape at Stonehenge and to facilitate shamanic rituals at the site. They embody a deep longing for reconnection to the spiritual homeland and the ancestors as evidence from burials is now showing that the builders originated in that part of Wales. But they are also powerful healing stones as stones with magnetic fields have been demonstrated to stimulate more rapid healing of broken bones.

Bluestone is strongly connected to the telluric or dragon currents of the earth which spiral out from the Preseli Mountains. This current can be harnessed for personal and earth healing (see the Bluestone Journey — page 18). Holding Bluestone increases your sensitivity to vibrations and heightens your awareness of crystal, meridian or sound frequencies. It opens all your metaphysical senses. By balancing the meridians and restoring energetic harmony, Bluestone creates an unshakeable core stability for the physical and energetic bodies. Placed over the thymus (higher heart chakra) it strengthens the psychic immune system. At the base of the skull, it harmonizes the brain stem and activates the hippocampus, an inner compass that assists direction-finding and orientating yourself in the physical world. Combining Bluestone with chalk produces a powerful battery to combat energy depletion in the physical body or the earth. It is no wonder it, as with so many other rocks and crystals, was so revered by our ancestors.

And here’s some information about Preseli Bluestone Dragon skulls from the Scottish Dragon Wisdom School:

This stunning Preseli Dragon comes from the Preseli mountains in Wales. It is a Galactic Dragon and a portal to the Star Being Realms. It’s an ancient stone of dreaming and memory re-call and it will align your energy to the galactic Centre. It’s highly beneficial for the immune system and bringing the body into balance. It is an emotional stabiliser and this dragon is here to aid with interstellar communications and wisdom from other galaxies and universes. It opens up the pineal gland in the third eye and is here to aid with the re- alignment of your divine blue prints.

Also of interest are the videos about the Preseli Consciousness and the Cosmic Layout of Stonehenge found on the Celtworld Studios website (at the bottom of their “specials” page).

I can feel there’s something very special and different about this little Dragon called Emrys and  in time I hope to be able to meditate more with him to see what else he reveals to me. 🙂 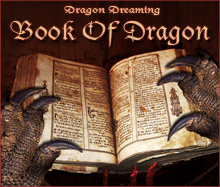 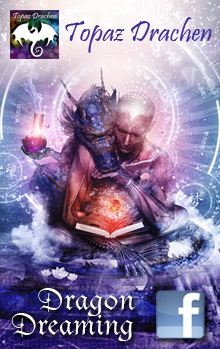 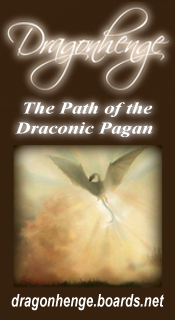 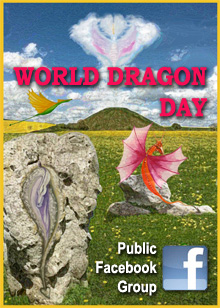