I’ve always been drawn to SHINY THINGS, especially silver jewellery, so when I saw some photos of dragon eye rings recently I was in love and just had to have one! I searched online for quite a while until I felt I’d found the perfect ring, then sent off my order and waited impatiently for it to arrive from overseas. It only took 9 days from the time I ordered to its arrival yesterday morning. However, when I opened the box and saw it for the first time my immediate reaction was disappointment rather than elation. 😦

Yes, I know it’s a handmade ring so of course it’s not going to be identical to the one that was photographed for the advertisement, but I did think it would be a lot closer than it actually is. I’m very fussy about quality of workmanship and little details so I was not impressed to immediately see a crooked eyeball staring back at me. The elongated reptilian pupil of the eye is not aligned vertically, nor is it painted in the exact centre of the eye, and the silver surround of the glass eye is round instead of “eye-shaped” as was shown in the ad. The advertised ring also looked a lot brighter and shinier  but even after I polished mine with a special silver polishing cloth, my dragon eye ring still has a darker grey sheen rather than a nice bright silver sheen. The “eyelids” are also shaped differently and are not smooth and streamlined as shown in the ad, plus my ring doesn’t looked as nicely finished, with a rather “chunky” appearance, whereas the advertised ring had nice fine, smooth lines. 😦

Maybe my gimpy little dragon eye ring will start to “grow on me”, or I’ll figure out some way of modifying it slightly so I’m happier with it …I don’t know. Maybe there’s a lesson for me here about getting too wrapped up in shiny material objects? …or buying online? …who knows? 😉

Due to an optical illusion created by the convex glass cabochon, it gives the effect that the eye “follows” the observer no matter what angle you view it from. I found that if I wear the ring up one way and not the other, this optical illusion kinda corrects the wonky pupil, making it look a little straighter …well, that’s what I’m telling myself anyway.   :::sigh:::

I messaged the seller and he apologized for having listed the old design of the ring by mistake, which is no longer made due to some problem with the back. He offered me a full refund, including on 1st class postage back to the US, but I decided to keep the ring anyway, rather than have no dragon eye ring at all, and just thanked him for his offer. I found one more message from the seller later on saying that he had taken down the ad for the old style ring and thanking me for pointing it out. There is another ring advertised that is the same as the one as I got, except that it has a different coloured eye. When I originally saw it I didn’t like the rougher styling of that silver ring at all which is why I chose the one I did, but I’ve ended up with the chunky, ‘hand oxidized’ design anyway. Oh well, dull grey little “Gimpy” really is starting to grow on me …yes, ‘he’ now has a name. 🙂

A fellow member of a private online Dragon group asked me this about my ring, “Is this a case of the ring picking you? Have you looked through the eye yet to see what it sees?” Ever since this ring arrived yesterday I’ve had this weird feeling that this is the ring I’m meant to have, in spite of my disgruntled distaste for its chunky, dark, oxidized, uneven styling not being that of the sleek, bright, shiny and refined piece of artistry I was expecting. Maybe Gimpy’s message is that I need to be more accepting (or at least more tolerant) of what I see as imperfections or faults in others, and also in myself, and to look deeper, beyond the surface of all things. I thought I did that anyway …maybe I need to look deeper still? It certainly has inspired some self-reflection. After all, every time I look at the ring it’s lookin’ right back at me with its crooked little eye!

Anyway, I’m feeling happier with the ring now as tonight I used my little “Dremel” tool with a tiny metal polishing brush and managed to polish off all the darkened oxidising, so now Gimpy is a bright, shiny silver. 😀

I bought another ring from the same person. This new one appeared to be closer to the style I wanted originally, but again, nothing is ever perfect. When the new ring arrived it did at least look pretty much the same as the one advertised, except that the eyeball in the new ring is positioned more crookedly than the eyeball on the first ring I bought (which in the photos above was oriented and photographed to make it look straight). Oh well, nothing could be done about it and there wasn’t really anything wrong with the ring so I thanked the seller and left positive feedback on his website and just accepted the fact that I had another wonky-eyed Dragon ring. :::sigh:::

Both rings are shown in the photos below, this time with no fiddling around to hide the irritating misalignment of the reptilian pupils which should be vertical, not oblique! 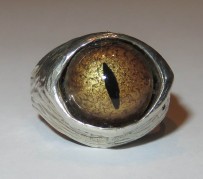